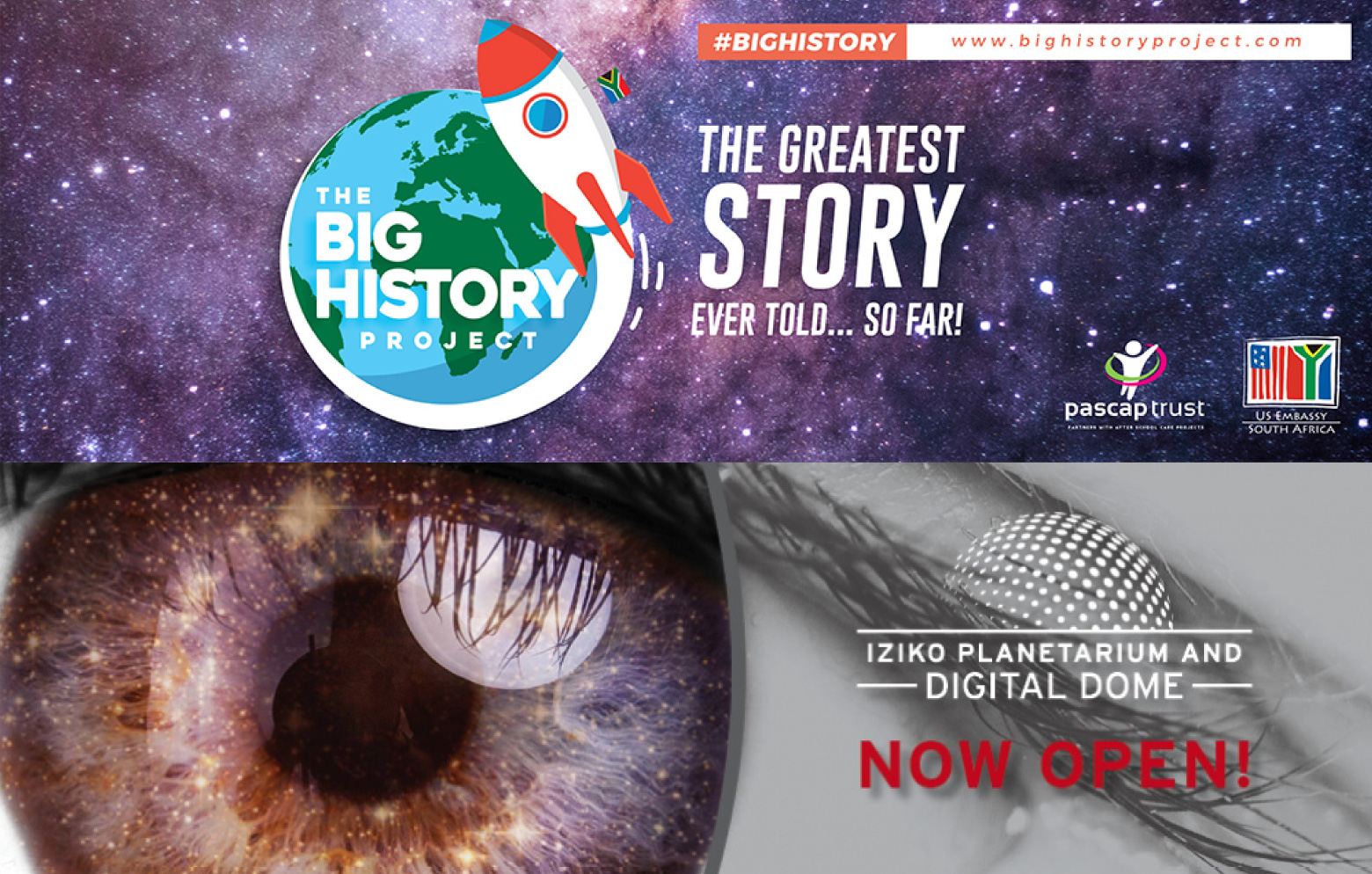 This year, thanks to the support of the US Embassy, PASCAP Trust ran four 10-week Big History classes at our after school centres in Khayelitsha, Tafelsig, Mitchells Plain and Hout Bay. To complement the course’s big ideas and support related local organisations, our young Big Historians went on three science-themed excursions around the Cape, the first of which was to the Mother City’s brand new digital dome…

At the top of our list of science-inspired places to visit in the Western Cape was the Iziko Museum’s new Planetarium and Digital Dome (“Transform the way you look at the world!”). This state-the-art facility opened its doors to the public earlier this year and cost R28.5 million to install. The new dome, now Africa’s most advanced digital planetarium, even garnered an endorsement from ‘your personal astrophysicist,’ Dr Neil DeGrasse Tyson:

“No longer is the visitor limited to what the universe looks like from Earth. Vistas from across the galaxy and the universe itself are now possible… A digital planetarium further enables the wonders of the natural world to touch our lives in unexpected ways. Whether we gain perspective of our place in the world experiencing the diversity of pan-African culture, its folklore, and its art   ̶ writ large in the night sky; or by witnessing the forces of nature and how climate-change affects our planet; or by exploring the infinite universe   ̶  we are not the same walking out of the dome as when we walked in.”

We experienced Cosmic Collisions, an awe-inspiring space show that revealed how gravity’s constructive and catastrophic influences resulted in the very conditions that allowed us to enjoy the show in the first place! “Here are explosive encounters that ended the age of the dinosaurs and gave birth to new stars, but also created conditions essential for life on earth—the Sun’s warmth, ocean waves.” Amazing. PASCAP was proud to be able to support the new planetarium and thrilled to give our young Big Historians the chance to see the cosmos like never before.

After the main show, and before our learners explored the rest of the museum (African dinosaurs!), the dome’s enthusiastic operator (he was, after all, pulling the strings on one of the continent’s finest edutainment centres) gave us a personalised tour of the night sky in real time. (Here’s another awesome capability of the new technology: it can be updated when new data from other scientists around the world comes in—science truly is because of others!) Zooming in and out we watched as he played with the cosmic perspective on display, pointing out celestial objects, constellations, and other galactic points of interest once hidden but now revealed. It was, as the website promises, a “radical change from our peaceful night sky.”

Big History learners are challenged to think about time and space like never before (and then, incredibly: “You are Here!”), and the new planetarium’s ‘sufficiently advanced technology,’ its digital wizardry, beautifully revealed some of the relatively early acts of the greatest story ever told—so far.

“Every one of us is, in the cosmic perspective, precious,” wrote Carl Sagan, one of Dr Tyson’s early mentors, in his influential book Cosmos. And we at PASCAP couldn’t agree more.

NEXT: PASCAP’s young Big Historians visit the new Isivivana Centre in Khayelitsha for a special screening of the Oscar-winning space drama, Gravity.